As you may already know,  3 days ago,  in Bangladesh, yet another blogger has been murdered by Islamists. He was a blogger of Atheistic persuasion, and an organiser of the Science and Rationalist council of Bangladesh. 6 young men entered his flat and brutally hacked him to death before fleeing in front of the eyes of bystanders. Within 15 minutes of the killing, Islamist militants sent out mailshot to media houses claiming the ‘credit’ for the kill. their letter said ‘We Do not forgive, We do not forget’.

Since Niloy Neel (pen name of Niladri Chaterjee) was killed, the world erupted in anger and condemnation. Condemnation towards Islamists for resorting to killing free thinkers, and anger towards Bangladesh government for ‘failing’ to protect those free thinkers from Islamists.

Since the incident I have been speaking with a number of News, Radio and TV and activist platforms. One common theme I can’t help noticing is that almost everyone assumes that ‘Bangladesh is a Secular state’.

Most of the time this made me sad. Do you know why? read on. 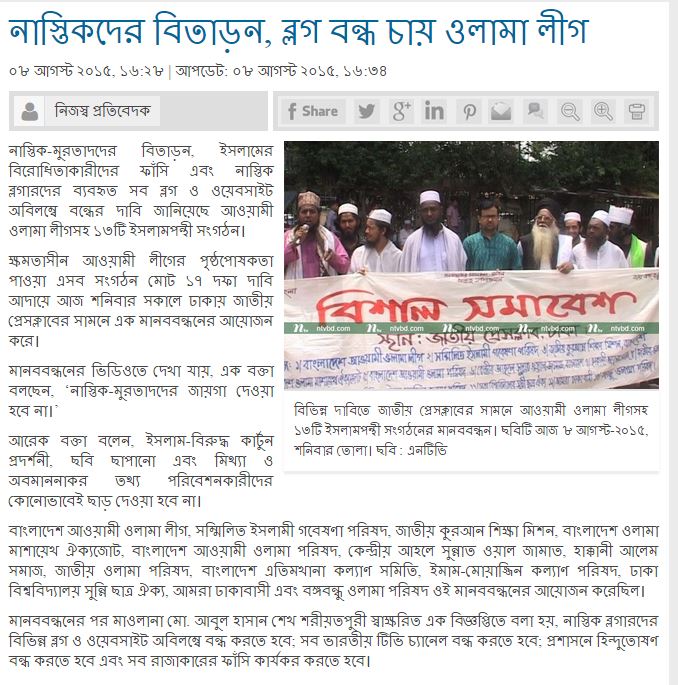 The Tale of the Islamist:

Following the killing of Niloy, Bangladesh Olama League (the Islamist wing of Bangladesh Awami League, the party running the government now) have showed rage against Atheists openly in the capital. They then demanded new laws to be formulated with ‘Death Penalty’ provisions for Atheistic bloggers. Among many of their inhumane demands, they wanted all community Blogs allowing Athiestic writings to be shut down by government.

Their arrogance and righteousness in uttering those demands clearly shows their power and presumption that their demands will be met. 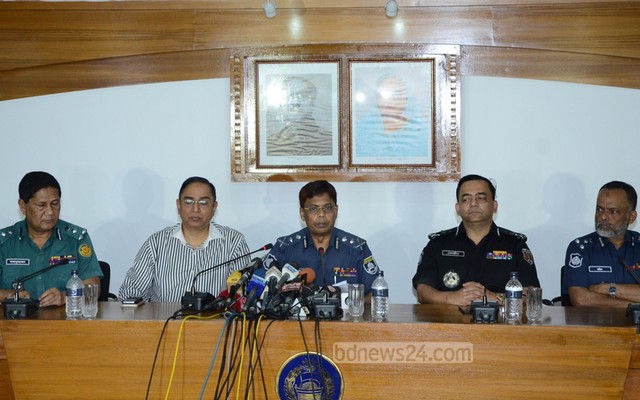 The Tale of Police:

In response to the Islamistic demand from Olama league, despite the pretend investigation of the murder, Police seems to be more interested in appeasing the Islamists. The Chief of police in capital Dhaka briefed the press. In that press briefing event, do you know what he said?

Well, it’s not like this is only the 5th killing of the same kind in last two years and as the protector of the citizens and failing miserably at the job, he would, at the least apologize for the police failure, right? I mean you’d expect that from the police force of a civilized country.

You could not be more WRONG!

Take a look at this excerpt from the news:

At a press briefing at the Police Headquarters on Sunday, he also suggested notifying police if anyone’s blog was found to be offensive to religions.

“There will always be free thinkers. I have enough respect for them. But we need to remember that hurting religious sentiments is a crime according to our law. 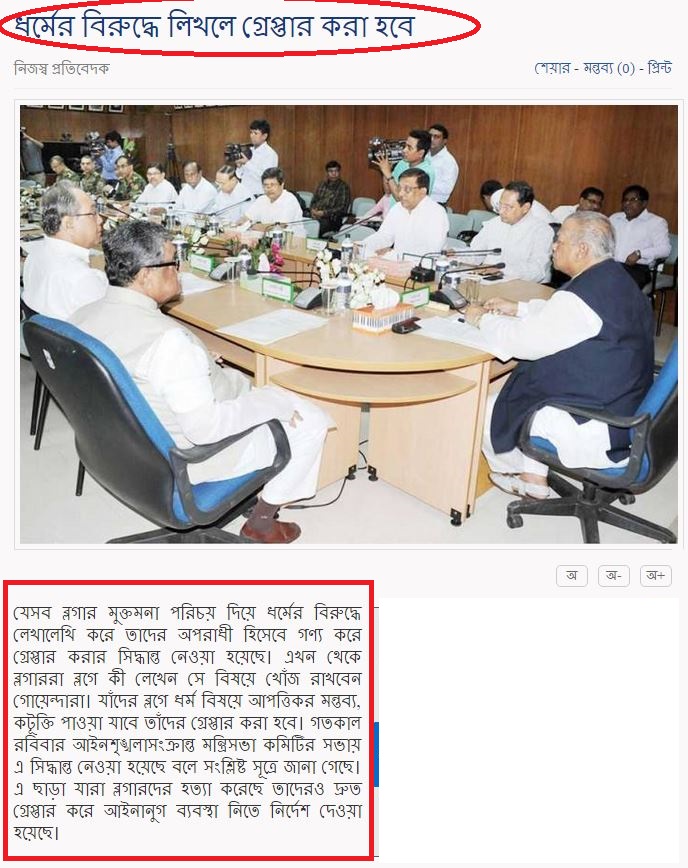 The Tale of the Ministers:

Following the press briefing of the Police Chief, a number of government Ministers in a ‘Law and order situation’ related meeting held at the ministry for home affairs unanimously agreed to order arrest of anyone blogging in a manner that could defame religion. Above is screenshot of a news article (in Bengali) showing the meeting.

We can clearly see the trend here.

Voices against religion and its abusive practices (Islam and other religions) is being chocked as a joint project between governmental powers and not so legitimate powers.

Handcuffs and Machetes are two sides of the same coin.

Caught between rock and a hard place:

You can imagine life a Joe Blogger in Bangladesh. On one side Islamists are shouting in the streets, killing bloggers on the streets, at home. On the other hand Government and the citizen protection force that wsa supposed to protect the citizens of a ‘Peoples Republic’, are actually inviting other citizens to tell on them!!

United Nations, European Union and many more International bodies have condemned these killings. They have demanded the killing to stop. But the demand is towards Bangladesh Governemnt under the false assumption that the so called ‘Secular Government’ is actually secular in action and will be protecting the bloggers.

Bangladesh government strong with Islamist support were Laughing their rear off to these absurd demands form the international bodies.

Saudi Arabia want’s the Atheist bloggers gone. For all we know, Saudi Barbaria has laws declaring Atheists as terrorist (in their own minds). And when a country have Saudi Arabias backing of atheist gagging program, International pressure is nothing more than a nuisance.

So, by talking about humanistic principals, by voicing concerns about ill effects of religion, these bloggers have now shot at their own foot and put their own well being in danger.

The realm of Freedom of Speech seems to only start from Eastern Europe towards west. the Eastern part of the world belongs to expanding Saudi empire and not Speech is no longer a human right.

Can anybody help the bloggers? Can the rest of the world stop assuming Bangladesh is Secular? What will the world do now? will the killings continue?